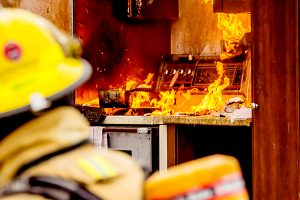 Where do you find comfort, good conversation, occasional chaos, and tons of delicious cooking? The kitchen. It’s no surprise that the kitchen is the central hub for activity in most homes. Food tends to bring families together day or night and under any circumstance. Even though a kitchen can bring families together, it can also cause complete and utter chaos. In fact,
between 2011 and 2015, there have been over 85,000 house fires that started in the kitchen. Year after year the numbers of kitchen fires don’t seem to be declining. At Total Restoration in Magnolia, we’ve compiled a list of helpful tips to help you prevent any fire damage disasters that may start in the kitchen.

Keep a close eye on any heat source.

You would be surprised at how many homeowners have said, “I only left the kitchen or a moment,” or “It was on low heat” after a kitchen fire had caused significant damage to their homes. Leaving the kitchen while you have an active heat source is a big no-no in the first safety world. Temptations to pass the time by watching tv in the next room or leaving the kitchen to grab something can have severe consequences. You’ve probably left food cooking in your kitchen several times without everything going up in flames, right? Let’s say that leaving the kitchen won’t result in a fire 100% of the time. What happens when there is only a 5% chance of a fire breaking out when you leave the room? You’d only have to leave an active heat
source in the kitchen unattended 95 times before a fire broke out. Do you really want to risk it?

It is amazing how disorganized the kitchen can get during the breakfast, lunch, dinner, and even snack time rush. Great food does require preparation after all. However, it is essential that dishtowels, recipe books, plastic utensils, and ingredients get put in their proper places to avoid a fire damage disaster. Keep any flammable material away from heat sources, such as the
stove, hot grill, even a hot coffee maker. Grease can quickly ignite food and can pop and spill so it is worth taking an additional minute or two to tidy up any cooking areas.

Know how to cook with grease.

Roughly 26% of kitchen fires are started with cooking oil or grease. Grease fires can spread quickly and burn intensely, causing extensive fire damage in a blink of an eye. You may have heard the dangers of cooking with grease, but take the following information into consideration when you start cooking:

The list of kitchen fire prevention tips the experts at Total Restoration in Magnolia compiled is only the tip of the iceberg. Talk to your local fire safety experts to learn more about preventing kitchen fires.

Office Hours: Monday – Friday 8 AM – 5 PM
If you have an emergency, call us 24/7 for fast, emergency response!