What Really Happens In A House Fire? 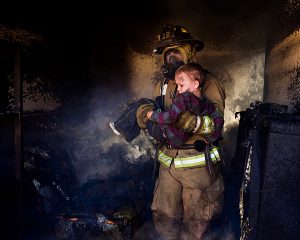 Few people understand the process that a house fire actually goes through from ignition to being extinguished. However, it is an important thing to know if you ever find yourself in a house fire or just to be better prepared to prevent future fires from occurring. Thus, we have included the progression of house fires below. If your home is ever ravaged by a fire, our team of restoration professionals at Total Restoration in the Magnolia area is here for you to help you throughout the restoration process.

Since the greatest proportion of house fires begin in the kitchen, we will use a kitchen example for this hypothetical fire. Imagine there is a pot boiling on a stovetop that boils over, spilling flammable, oil-laden contents onto the red-hot burner. In under a second, the substances in the oil will burst into flames. The flashpoint for fires like this is typically 600 degrees Fahrenheit but can be as high as 1000 F when the stove is on high.

Within just seconds, the fire will easily spread to other parts of the home. The fire will begin to grow as it reaches other combustible materials like paper towels, cardboard, and dish towels. This is the crucial moment to extinguish the fire. Water won’t work on a grease fire so use what you can to deprive the fire of oxygen or use a fire extinguisher if you have one.

At this point, the fire will continue to grow larger and larger by engulfing larger objects like wooden cabinets and countertops. It will also be large enough to begin releasing large amounts of poisonous gases like carbon monoxide and hydrogen cyanide. Just two or three breaths of hydrogen cyanide are enough to cause one to pass out.

At this point, the fire will rise above 400 F, high enough to kill people. After 2 minutes, it will continue to grow even hotter allowing the fire to spread through direct contact or auto-ignition. Auto-ignition occurs when an object becomes so hot that it will burst into flames even if it hasn’t been touched a fire.

Throughout this time, the fire will continue to rise to tremendous temperatures. The fire will have risen into the ceiling and within the walls. It will be easily visible from the street. After just six minutes of burning, the roof can collapse in and the home may experience total devastation.

The aftermath is never pretty. Rooms that had the fire in them will obviously be severely damaged. Even rooms that the fire never reached will still have significant damage from melting plastic and glass, blistered paint, and charred wood. Most appliances are probably ruined beyond repair.

As you can see, house fires should never be taken lightly. The damage they can do to a home is massive. Fortunately, you don’t have to endure this type of disaster on your own. Don’t hesitate to give us a call at Total Restoration in the Magnolia area for top-of-the-line fire damage care and quality.

Office Hours: Monday – Friday 8 AM – 5 PM
If you have an emergency, call us 24/7 for fast, emergency response!